While the original concept of bringing the pages of the magazine to life gave us a roadmap, there still was the question of where to begin.  Well, a Cover Party seemed pretty logical, since the cover is the first thing people see each month. We knew we had to kickoff this “unconventional convention” with something special, so we decorated the walls with poster-size reprints of all 120 magazine covers, and set up a photography area where you could trade in your generic name badge for one that featured you on the cover of MAGIC Magazine. We rounded things out with a five-piece band and a trading card game (Covermania), where you had to swap eleven of your twelve cards to get a complete set of Volume I covers. 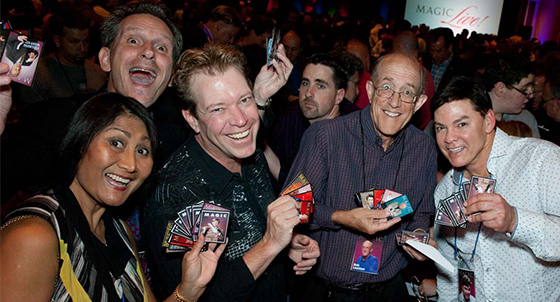 Once everyone was present, the 10th Anniversary issue was unveiled, and a special numbered and gold-foiled edition was distributed to all registrants. Finally, a wall of balloons floated away revealing the Advertisers’ Fair, and the party expanded into our dealer room.

When designing the Cover Party, our team was faced with whether or not to have a show as part of the festivities. We wanted to have magic performed, but didn’t want to interrupt the socializing. The answer was to hire street magicians who could gather a small crowd and do short shows whenever and wherever. We were fortunate to be able to book Jim Cellini, a world-class street performer, and Bob Sheets, a magician capable of drawing a crowd just about anywhere. Over the years, we branched out to other styles of performers to provide “casual performances,” including Steve Bargatze, Billy McComb, Francis Menotti, Tyler Wilson, Gregory Wilson, and Kozmo. 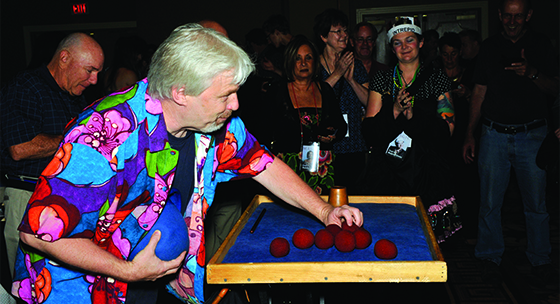 In 2004, we kicked off our second convention with another Cover Party. While it had a similar look and another Covermania card game, we felt the party didn’t have the same energy it did in 2001. So, for our third event three years later, we dropped the trading card game, opened up the size of the ballroom, and introduced a theme — The Art of Magic. There were displays of paintings, automata, balloon sculptures, candy magicians, pumpkin carving, and even a hand artist. That same year, the Food Network filmed an episode of Dinner Impossible at the party, and Neil Patrick Harris acted as our guest host. All and all, we recaptured our energy!Keeping with the Class of ’09 theme two years later, the party was held in a “high school gym,” complete with basketball hoops, paper streamers, ice cream sundaes, and even a DJ playing hits through the decades and changing his costume with each era. We also put a new spin on the old trading card game, using high school graduation photos of famous magicians, who were all at the party. Marvyn Roy told us that he must have signed 700 cards that night!Since 2011 was the 20th Anniversary of MAGIC Magazine, we invited all of the magicians who had appeared on the cover to join us for a photograph. Almost 50 of the most prominent magicians from around the world posed onstage as camera flashes exploded.

In 2015 the trading cards were old fashioned “cabinet cards.” These publicity pictures printed on postcards were from a fictional group of vaudeville magicians know as The Conjuror’s Nine. It was later revealed the cards were the key elements of a Room for Doubt style murder mystery effect. The instructions and mysterious recording for the trick were available at our online lecture note website, The Vault. The compass used in the trick was part of the adventurers gift pack given out at registration, and the UV light needed to reveal the surprise ending was part of the packet of test materials given out at Richard Wiseman’s Experimental show. It all came together in a big surprise.

As an added extra surprise, all nine characters from the cards made an appearance at the Bon Voyage party the final night of the convention. In full costume and make-up, they posed for pictures with our guests throughout the party.

Yes, that’s right, not only do we have an opening night party, but we also close our convention with a final blowout blast — a last chance to say goodbye to new friends and old. In 2001, we noticed that no one seemed to want to leave after the last show, and folks hung out at the bar late into the night. So, in 2004, we thought we’d provide a place to do it! Since the last feature in the monthly magazine is called Finally, we thought it appropriate to dub it our Finally Party.

As the stage show ended, a dixieland band led everyone out of the showroom, up the escalators, to the party above where they had snacks, cake, and coffee. In 2007 large blow-ups of pictures, such as those featured on the magazine’s Finally page were scattered throughout the rooms and people were invited to write in their own captions — some of which were featured later in the magazine. In 2011, we went beyond snacks and cake to include a mashed potato bar with a smorgasbord of different toppings.

In 2013, the staff blew everyone away by making the 17,000 square foot dealer room disappear — transforming it in a matter of hours to a massive party room. That night guests were treated to the “final” performance of Tomsoni and Company, performed with a live band, with a follow-up tribute by Lance Burton and Penn & Teller. Lance’s showgirls, who had not been together since his show closed three years earlier, presented cakes with characters of Johnny and Pam on them, so everyone at the party got their just desserts.

In 2015, the dealer-room-to-party transformation was recreated and the delicious smell of hot garlic bread filled the air as people lined up at the pasta stations for a late night snack. As mentioned earlier, The Conjurors Nine showed up for thousands of selfies, and one lucky registrant played for a chance to win $100,000. Although he didn’t take home the grand prize, he did win $1,000!

The 2016 farewell party offered a special presentation — over 75 cover subjects live and onstage.  It was certainly a momentous occasion.The opening night party and farewell party are two of our most popular traditions at MAGIC Live.