Yes we do. They’re a basic security requirement for any convention. But back in 2001, when we designed the first MAGIC Live, we wanted to do something different with almost every aspect of the gathering. This included the ID badges. Wouldn’t it be cool if we could fulfill many a magician’s dream to be on the cover of MAGIC Magazine? At first, we were hesitant, concerned that people would pass off the photo badges as the real thing on their websites or other publicity, and we didn’t want to compromise the integrity of the magazine. But then it was pointed out that any five year old with Photoshop could do that anyway, so the fun was worth the risk. 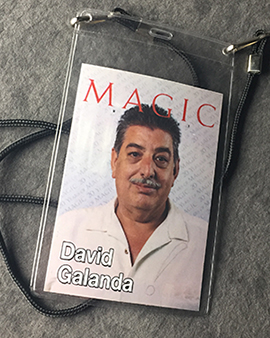 Before being admitted into the opening night party at the first Live, guests went through a reception line made up of the magazine team. Many of those guests noticed the custom badges the team was wearing and assumed they were just for the staff. Much to everyone’s surprise, a booth was set up inside the party where they could trade their basic badge for a photo badge. The idea was a success and, even though it was made clear the booth would be open the following day, the line was long all night.The second year people arrived expecting the photo badges and some came prepared with “cover concepts.” One had a Masked Magician hood, another wanted to shoot the back of his head, and more than a few showed up in his or her show tux or costume. Also, to distinguish from the previous year, the background was changed. This has continued every year, with some collectors having eight different badges with eight different MAGIC Live backgrounds.In 2009, our theme was a class reunion, so we provided optional costume accessories appropriate to the occasion: letterman jacket, homecoming king or queen crowns, cheerleading sweaters, etc. Unfortunately one of the two photographer’s systems broke down, which resulted in long lines.In 2011, we decided to require the photo badge for security purposes, and therefore everyone was required to have one. A new company was brought in to accommodate the increased demand, but the system went off its tracks and, well, pretty much crashed and burned. It was a mess. There were long lines to have your picture taken and, in some cases, it was hours before folks got their badges. (If you know David Galanda, tell him we finally have his badge ready!)For the 2013 Live, we contracted with a company that had plenty of experience creating photo badges for corporate events. With two efficient workstations running simultaneously, all went smoothly and the wait was only a few minutes. And that meant that most everyone opted to take part.

In 2015 our theme was adventure, and it was the first time we changed our badge to be distinctive to our theme rather than a facsimile cover of MAGIC.

As we were celebrating 25 Years of MAGIC in 2016, we returned to having your photo on the cover of the magazine.  But now, with the magazine gone, we’re reimagining our photo name badges, as well as so many other aspects of MAGIC Live!