After the success of Divided We Stand, our 2011 show on the story of Sawing a Woman in Half, quite a few people asked if we were going to do another Documentary Live at the next convention. “The history of the levitation, right?” was the most popular guess. It was an obvious way to go — which is exactly why we didn’t want to do it. We did, however, want to brand the Documentary Live format to our convention, but on what subject?

We considered the story of a place, such as The Magic Castle in Hollywood, and we considered a specific show, like The Magic Show on Broadway. Well, the Castle was covered in a yearlong series in MAGIC Magazine during the Castle’s 50th anniversary, and the story of The Magic Show was told quite extensively at its 45th milestone. Other ideas for a show included a magician from the past, a famous book on magic, and even a magic club. And it was that last one — the story of a magic club — that kept popping up.

While the Long Beach Mystics certainly had an interesting story, Stan shied away from it because, well, it was the club he grew up in. Plus, a show performed by the members of the group had been featured at the 1996 SAM Convention right here in Las Vegas, with Mike Caveney and Stan co-hosting. And yet, the idea kept resurfacing. The club really does have an amazing number of today’s magic stars as alumni, and the fact that most of them are still closely connected decades later fit perfectly into the theme of the convention — Friends! So, Mike Caveney was once again asked to write the story and Bill Smith stepped up to produce the second Documentary Live show, DeMystified, in 2013. 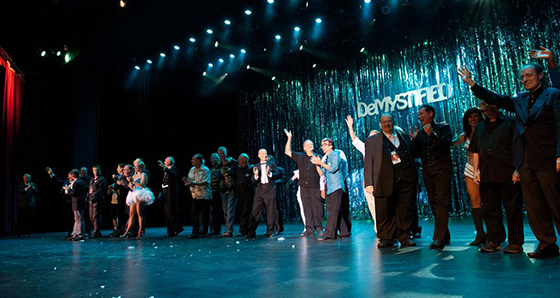 The running order was James Hamilton (a charter member of the club) doing his re-creation of Alexander Herrmann, then Victor & Diamond, Michael Weber, Kalin & Jinger, Kevin James, Randy Pryor, David Deeble, Armando Lucero, Dana Daniels, Les Arnold & Dazzle, and Mark Kalin doing the Multiplying Billiard Balls, just as he had practiced it as a young Mystic. Mike Caveney and Stan Allen again hosted the show, sharing history, personal stories, and memories. The show climaxed with all of the club members in the audience joining their friends onstage — nearly three dozen in all!